A Golden Buddha in the middle of Bangkok, the city of the most beautiful temples. Even those who are not particularly interested in religion should not miss the biggest highlights like Wat Pra Kaew or Wat Pho.

The Golden Buddha in Bangkok is located in the temple Wat Traimit and can be optimally combined with a visit to the nearby Chinatown – and a few steep steps even provide a small fitness factor (for those who haven’t traipsed around enough while sightseeing). You have to go up the steps to Wat Traimit, and inside actually waits a golden Buddha made of pure gold!

Facts about the Golden Buddha at Wat Traimit in Bangkok

By the way, the Buddha is not only called “Golden Buddha”, but it is actually almost completely made of gold! Weighing over 5 tons and worth about 250 million dollars, he just stands there, completely open, without any security measures in the small temple on top of the whole temple building. Fascinating. And my impression is confirmed again that 1. Thais have an incredible amount of respect for their religion and 2. stealing is absolutely frowned upon and people feel much safer in this respect than in many other countries.

You can find more inspiration for your Thailand trip in my
➜ Thailand Blog!

A Golden Buddha in Bangkok: Important rules for visiting the temple

As in all of them, if you want to see the Golden Buddha up close, you have to remember to take off your shoes and cover your shoulders and knees. After all, temples are religious sites that want to be respected. Even though the weather in Thailand often calls for lighter clothing, when visiting temples you should avoid short shorts and tank tops if possible. In Wat Traimit, as in most temples popular with tourists, there is also a small clothing store of scarves and shawls, which you can help yourself to for a small donation. The stand is right at the top of the temple.

From Wat Traimit, by the way, you also have a great view of the gateway to Bangkok’s Chinatown, an exciting part of town that you should look at right away in conjunction with the Golden Buddha.

If a Golden Buddha isn’t enough, maybe a private temple tour of Bangkok is for you! There you will not only visit the temples, but also get a lot of background information:

➜ Here you can book a tour of Bangkok’s most beautiful temples!*

You can also find more posts about Thailand here:

Hey there! I created The Happy Jetlagger in 2015 to gather all those lovely places I got to know during my trips. I love to inspire others on their travels and to discover unique destinations! Working many years as a flight attendant, I finally found a way to share my travel experience. Hope you enjoy it!
Instagram TikTok Pinterest
Vielleicht interessieren dich auch diese Artikel: 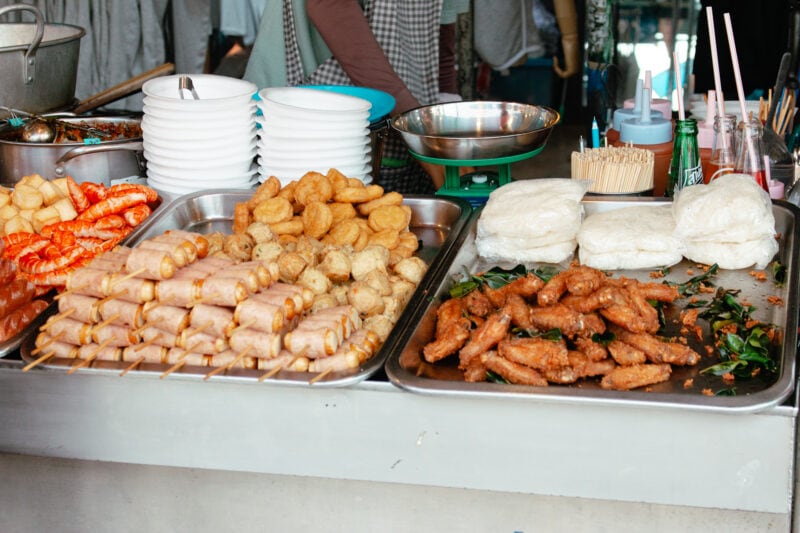 Shopping in Bangkok: The Chatuchak Market

Hotel Review: The Memory at On On Hotel in Phuket